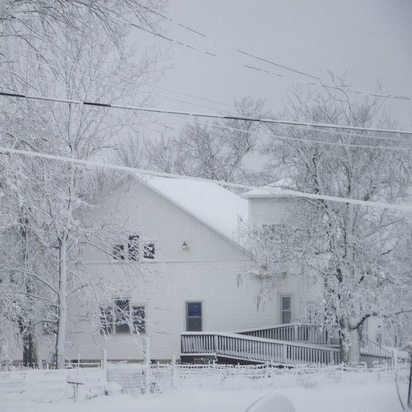 A Brief History of the Various Church Organizations in Rush Hill, Missouri Previous to the Community Church.

The different church denominations in the church community before the Community Church were First Christian, Evangelical, Lutheran, Holiness, Baptist, Catholic and Methodist. The first church, known as the Sabbath Home Church, was a frame edifice that stood on the Robert Dye farm south of town and was owned by a Methodist congregation. B.F. Clark, an ardent Methodist and merchant in Rush Hill bought the church building and moved it to the north part of town. The Rev. Don Nichols, who afterwards became a missionary to China, was one of the first pastors. Old families of the Methodist church were the Coakleys, Roberts, Maxwell, Farrah, Collier, Skelly, Clark, Peery, Erisman, Spencer, Smallwood, Howes, McCall, George and Beahrs.

The Baptists once had an organization here and among them were the families of J.L. Carnes, J.H. Bradley and Louis Baehrs. The German Lutheran church organized in 1911. Families of the church were Melahn, Mertena, Merten, Flesner, Geiscker, Gerwin, Suhre and Fautz. Charles C. Hill organized the Christian Church on December 9, 1893. Brother L.T. Pasley broke the sod for the new church. Families included Pasley, Kendall, Doolin, Yarnell, Talley, Smith, Richter, Ridgeway and Green. The Christian church stood on the present church site. The Reverend Bowling Green Reavis, evangelist of Mexico, MO held a revival tent meeting for the Christian Church. He believed that all Christians could worship and work together and proposed cooperation of the community.

The First Christian Church building which stood on the present site of the Community Church was torn down to have a new building erected. While the Christian church was being torn down and the new building erected, services were held in the upstairs of the Doolin building. The cornerstone of the new Christian Disciples of Christ was laid October, 1914 with the local masons in charge of the ceremony. The inscription read: Christian Church 1914. Work was continued on the building both by paid and volunteer labor. After becoming the Community Church the “ians” was removed, reading Christ Church 1914. The present building cost approximately $7000, with $4000 being subscribed initially. On December 2, 1917 the indebtedness of $3000 was eliminated.

Members of the First Christian Church were charter members of the new church. Other denominations were invited to attend and worship with them. On May 16, 1915 the formal dedication of the church was held with the Reverend Reavis in charge. Before being received into membership of this church anyone not previously baptized shall receive Christian baptism of any manner they elect.

Believing that all Christians could worship and work together, the denominations in Rush Hill united to worship God under one roof. As one drives into Rush Hill from the south, the church building seems to be overlooking the entire community in sort of a Guardian Angel manner. We give thanks to God for those past years and we ask His divine guidance through the coming years.

Excerpts from Mexico, Missouri and Laddonia, Missouri newspapers: Circa 1915

Hundreds of persons attended the dedication of the new Community Church at Rush Hill Sunday with the Rev. B.G. Reavis in charge. The services marked the culmination of a community movement inaugurated by the Mexico evangelist, which has no parallel in the religious history of Audrain. It was a gala day for Rush Hill. The crowd was perhaps the largest ever seen in town.

Scores of automobiles were parked about the church and long lines of horses and vehicles were hitched in the park and along the roads. Brother Reavis told that at a special meeting he had proposed Christian unity of the different denominations. Religious dogmas have given way to common sense and reason. Old statements of faith have not and will not solve the problems of life.

Forgetting the things that are behind should be our motto. We are following the light of truth, why should we falter? Darkness and doubt may come at times, but through these we are led to better things. I am sure our feet are in the right; we have not yet obtained, but we are pushing forward. Sometimes we stop to weep as we go but we shall come again bringing the sheaves. We have felt the thrill of new life. Man is only strong “when he dares to stand alone.” The evangelist made a stirring appeal to the congregation to work together with never lagging interest. Two persons, Edward Crooks and William Harper united with the church that morning following the dedicatory sermon. The Honorable Champ Clark delivered the address in the afternoon and all available space of the new building was occupied.

Speaker Clark said he advocated such a church as this and firmly believed it was the beginning of the end of so many weak and unsupported churches in small towns over the country. It is a waste of time, money and raw materials to attempt to keep up a half dozen churches of different denominations. The Community Church is not particular over the question of baptism. They will immerse or sprinkle just as you choose. They only insist you should make yourself right with your God and fellowman, that you confess your sins, quit them and live the life as near as your can that Jesus lived. When you get over yonder it will not be a question of form and ceremonies. Rush Hill is one of the few towns where all followers of Christ have united and worship God under one roof. Circa 1917 On Sunday, December 2, 1917 there was a happy congregation which gathered in the Community Church. The pastor, Reverend V.T. Wood had been holding a revival meeting with 16 additions to the church membership. It occurred to the preacher and six person (determined persons) that the debt was a drag and should be wiped out.

A committee went out to see the people and in a day or two there were 160 contributors giving $50 to $500 each. Rev. Wood preached a powerful sermon, basing his remarks upon passages from the “Sermon on the Mount”. Following the sermon, W.E. Cornett, Val Erdel, Ed Melahn, W.S. Doolin and W.H. Stuart marched down the aisle of the church having in their possession the notes representing the church debt. Misses Maud Cornett, Edna Erdel, and Ruth Stuart held the notes while Rev. Wood touched a match to the paper and they were consumed. The tenth anniversary of the church included a program for the entire week with a banquet held the first evening of the celebration. On May 12, 1940, the 25th anniversary of the church included Sunday school at 9:45 and worship services by the Rev. Hammond of Columbia, pastor. The choir was made up of people who had sung in the choir 25 years ago. Mrs. Tom Stark of Louisiana, gave the afternoon address, “My Trip to the Holy Lands”. There were 77 present that had attended the dedication and 175 others making a total of 252 registering.

Believing that we could more effectively serve the Kingdom of God and strengthen the local churches through united effort, the Christian Church at Liberty and the Community Churches at Martinsburg and Rush Hill joined together for the purpose of availing themselves of pastoral leadership and development of an enlarged church program in 1960. The name of this organization was the Christian Communities Pastoral Unity. The Rev. Jack Clough left this Unity on May 9 to be pastor at the Waverly Christian Church. The Rev. John Blass, presently serving as youth minister of education at the Christian Church in Joplin will begin his duties here on June 6, 1965. Rev. Blass served this pastorate until Sept. 1972.

Some of the Above Church’s Previous Pastors include: